1. Dodi fears he might pass away instantly, middle of the night. Every time he prays, he believes it is the last time he serves the God. Whenever he sees his only son, he feels that it is the last time of meeting him. Fear for the worst, he suddenly develops a panic attack, repeated many times in a week. So he becomes religious. He immediately meets a religious scholar who advises him to be closer to God. People around him are happy with his changes in character for the better.

2. Dodi meets me not because of his character changes. He becomes worried about his panic attack. He strongly believes he will be leaving his wife and his child behind.

3. He admitted when he was young, he used to abuse multiple drugs. The one he can’t forget is Ketamine. Ice and cannabis are included.

4. Now that he has married, he wants to stop taking drugs. Nevertheless, the new problem arises – panic attack.

5. His wife’s family entrusted him to run a family business. This put another burden on him.

6. Can drug abuse cause remote psychological problems in the future? Current understanding says, no. Some drugs like cannabis are known to cause amotivational syndrome and latent personality traits or disorders years after stopping them. Having seen patients with drug abuse, I believe probably drugs could.

1. Kelantan, the northeastern state experiences the worst ever flood in many years. The tragedy evokes many devastating images on Facebook. I stayed for 16 years in Kubang Kerian, behind the royal palace or infamously known as Istana Air Mata. Never before my house was flooded since Kubang Kerian was considered a safe haven. There is a river behind HUSM which runs along To Guru’s house in Pulau Melaka that eventually meets the South China Sea. Not uncommon to see the river overflows; covering the nearby fish pond during monsoon seasons.

2. Dr. Newton, the old friend of mine, used to bring me to his house, near Kelantan river mouth. To get to his house, I have to travel via Pengkalan Chepa airport and turn left into narrow, impoverished village roads. More often than not, I would witness families with small children, watching plane; arrival and departure, near airport runaway, experiencing fresh breeze of northeastern wind, directly from the sea.

3. Recent disaster is unthinkable. I am sad because I can’t help the people the way many volunteers do by going to the ground zero and provide direct help to people building their lives which have shattered by the disaster. I know there are many volunteers risking their life and comfort, helping flood victims without expecting any rewards and adulation.

4. I believe major disaster like this has multifactorial origin; be it internal or external. Web search has shown massive deforestation in Dabong, Galas, Manik Urai and Lojing. I guess, putting all together, they are as huge as Perlis state. I wonder who is responsible for awarding logging permit and making sure the company logs within the permitted area? Deforestation leads to collected water run downhill quickly overflowing rivers, stream and eventually low lying towns and villages. No time for water absorption as the catchment areas have long gone and perish. Deforestation theory is justified by the presence of tea colored flood water, thick mud and dust as well as massive logs stranded in front of dilapidated houses, in the aftermath of the calamity. 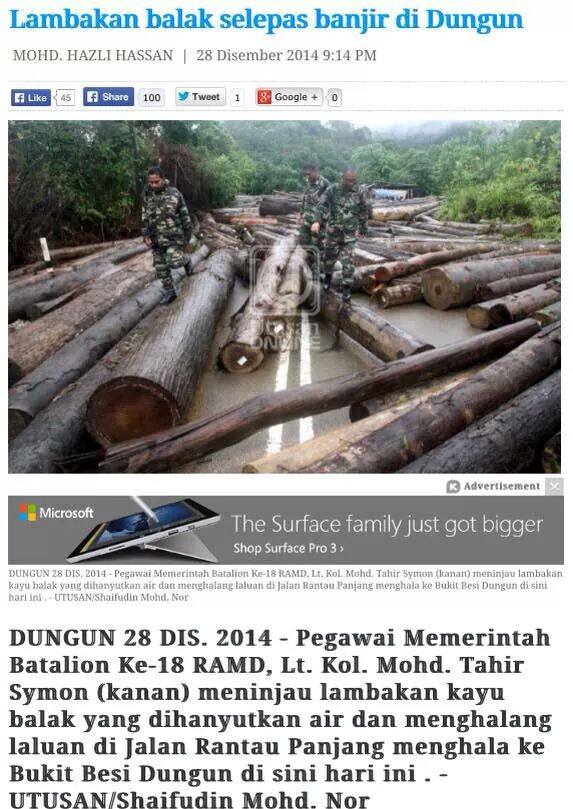 5. I was made to understand that this year phenomenon was made worse due to increasing sea tides, resulting from increasing distance between the earth and the moon.

6. A large amount of rain falls over a short period of time contributes to the flood as many clogged drains can’t cater the excess water volume in the state that is infamously known for having poor irrigations system.

9. Definitive long-term measures include building dams, developing proper flood mitigating system like dredging and deepening river mouth. Training of human resources like lifesavers, paramedics, security and health personnel must be made available throughout the year. They have to be put on alert when the flood struck every year ends. Strong leadership and command will eventually lead to a remarkable success.

10. Afforestation must become top agenda even if it might have a financial risk in return for environmental gain. END_OF_DOCUMENT_TOKEN_TO_BE_REPLACED