Scientists have leapt to defend the predictions made by their models of volcanic ash dispersal, the results of which grounded more than 100,000 flights across Europe this month over fears about safety. But with Europe’s airspace virtually paralysed for six days, the real question now is precisely how much ash can a jet engine safely tolerate?

With planes once again flying after the biggest disruption to European aviation in decades, critics have been quick to dispute the model used by the Met Office’s London Volcanic Ash Advisory Centre, responsible for predicting the movement of ash cloud from the Icelandic volcano Eyjafjallajökull.

Researchers say that their model tracked the cloud successfully: “I would completely defend the model as correct,” says Derrick Ryall, head of the Met Office’s climate programme. But critics argue that it overestimated the extent of the ash cloud, and therefore gave the impression that the risk to aircraft was far greater than in reality. “We must make decisions based on the real situation in the sky, not on theoretical models,” said Giovanni Bisignani, director-general and chief executive of the International Air Transport Association, the global trade organization for airlines, on 19 April.

The atmospheric dispersion model under fire was originally developed to track radioactive fallout from the Chernobyl nuclear disaster in 1986. This nuclear accident model (NAME) calculates how particles spread through the atmosphere — how far, how fast and how high — based on information about wind speed and direction, along with data about the concentration, composition and size of the ash particles.

During the days after the eruption in Iceland, a barrage of research showed the ash plume spreading as the model predicted. Ground-based laser ranging picked out clumps of ash; satellite images tracked the overall plume; and research aircraft sampled the plume directly. (By: Kathrerine Sanderson) 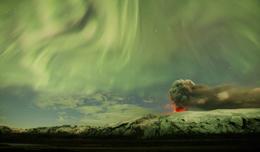